Microsoft has a tendency to come up with long convoluted names for products. (There are reasons for this...I hesitate to call them good reasons, but there are reasons nonetheless.) Back when we released the CTP4 version of Code First and DbContext the official name for the release was "ADO.NET Entity Framework Feature Community Technology Preview 4". Now that's a mouthful! So when Scott Hanselman blogged about the release he dubbed it the "Magic Unicorn Edition". The name stuck within the team and internally we frequently refer to what has become EF 4.1 as the Magic Unicorn Edition. 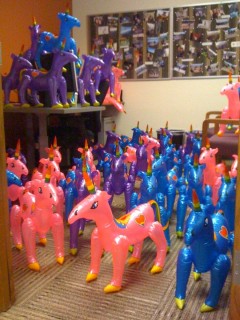 But it doesn't end there... As anybody who has read about (or experienced) Microsoft culture knows we tend to embrace weird geekiness. (I mean that in the best possible way; weird geeks are cool! (For some definition of coolness.)) This meant that various unicorn-related items started showing up in Building 18 and unicorn themes started to permeate emails, meetings, etc. Team members have various unicorn t-shirts, mugs, posters, and so on. When one of the Program Managers took a long vacation he returned to an office filled with inflatable unicorns. (Follow @efmagicunicorns on Twitter to see how these unicorns have fared since leaving the PM's office.) On occasion, we even started to refer to team members as unicorns.

So why One Unicorn? Well, I'm a member of the EF team, and this is my blog. So it's a blog from one unicorn on the team.

This page is up-to-date as of March 20th, 2011. Some things change. Some things stay the same. Use your noggin.